Q: What are the common DUI Field Sobriety Tests? 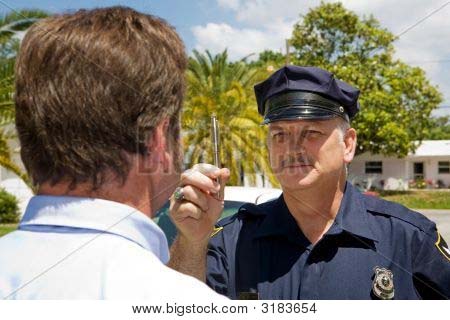 Q: What are the common DUI Field Sobriety Tests?

There are four commonly referred to DUI Standard Field Sobriety Tests – Horizontal Gaze Nystagmus, Walk & Turn, One Leg Stand, and typically a portable breath test called an Alcosensor. ALL OF THE FIELD SOBRIETY TESTS ARE VOLUNTARY. Of course, the Officer will not tell you this when you are asked to step out of the car to perform the tests. You have the right to refuse performing the field sobriety tests.

Horizontal gaze nystagmus (HGN) is an involuntary jerking of the eyeball which occurs naturally. This test theorizes that when a person is impaired by alcohol, nystagmus is exaggerated, and the alcohol-impaired person will have difficulty smoothly tracking a moving object. To administer this test, an officer asks the subject to watch a slowly moving stimulus, such as the tip of a pen. As the officer moves the object horizontally (back and forth), the officer watches the subject’s eyes as they follow the object, watching for six standardized “clues,” up to three in each eye, to indicate intoxication.
The presence of four or more clues is considered a failure of the test. The circumstances of a roadside administration, or a lack of training for the officer administering the test, can significantly affect and/or invalidate test results.

• One Leg Stand
The driver is instructed to stand on one leg, with the other foot suspended approximately six inches off the ground and count aloud by thousands (“One thousand-one”, “one thousand-two”, etc.) until instructed to put the foot down. The officer times the person for thirty seconds.
The officer looks for four clues of impairment, specifically whether the person puts the raised foot down, uses arms to balance (raises more than 6 inches from side), sways, and hops.

• Portable Breath Test (PBT)
This test is an instrument that the driver is asked to blow into on the side of the road. THIS IS NOT THE STATE ADMINISTERED TEST AND CAN ONLY BE USED TO DETERMINE THE PRESENCE OF ALCOHOL. The results of this test is typical used to establish probable cause for a DUI arrest.